Hunting for the next Advertise at Doncaster
Exclusive Columns

American blood rises to the fore

Thanks largely to concerns about whether top-class ability on dirt is transferable to turf and whether raceday medication has weakened the breed, the American thoroughbred is no longer nearly as popular in Europe as it used to be. It mustn’t be forgotten, though, that American horses have long been prized for their speed and precocity. Consequently, it is interesting that several of this year’s leading early two-year-olds represent a marriage between European and American bloodlines.

According to the Racing Post’s figures, the best of them is Juddmonte’s unbeaten Siskin, who has had two and a half lengths to spare at the end of his first three races this season, most notably the Railway Stakes. That effort boosted his rating to 115. Following his success in the Group 1 Keeneland Phoenix Stakes, his rating moved up to 116.

Although the product of two Juddmonte homebreds, Siskin is by the American dirt horse First Defence out of Bird Flown, an Oasis Dream filly who won over seven furlongs on turf in France.

The fact that First Defence is now in Saudi Arabia tells us that he wasn’t a runaway success as a stallion, but he has certainly had his moments, both on the track and as a stallion. With a son of Unbridled as his sire and a top-class daughter of the blue hen Toussaud as his dam, First Defence was bred along similar lines to the highly successful Empire Maker.

This Belmont Stakes winner was sired by Unbridled from Toussaud. I describe First Defence as a dirt horse because he made 12 of his 14 starts on dirt and another on all-weather. It was on dirt that he became a Grade 1 winner, in the Forego Handicap over seven furlongs, but he was also successful on his only appearance on turf, in the Grade 3 Jaipur Stakes over six furlongs.

Siskin is the third of his five Group winners to have won on European turf, following Dundonnell, winner of the Acomb Stakes, and Antonoe, a smart juvenile in France who later became a Grade 1 winner on turf in the US.

Siskin is also closely related to First Defence’s best winner, the champion American filly Close Hatches, whose dam Rising Tornado is a half-sister to Bird Flown. A five-time Grade 1 winner at up to nine furlongs, Close Hatches has made a fine start as a broodmare, her first foal being this year’s Kentucky Derby third and Belmont Stakes second Tacitus. You will also find plenty of class in Siskin’s bottom line, as his second dam Silver Star was a sister to Xaar, a champion two-year-old who enjoyed Group 1 success in the Prix de la Salamandre and the Dewhurst Stakes.

This is also the family of Cityscape and Bated Breath, so it is hardly surprising Siskin is very much at home on turf. Should he prove good enough to become a stallion in Europe, Siskin will have the considerable attraction of having no Sadler’s Wells, Galileo or Danehill blood in his pedigree. 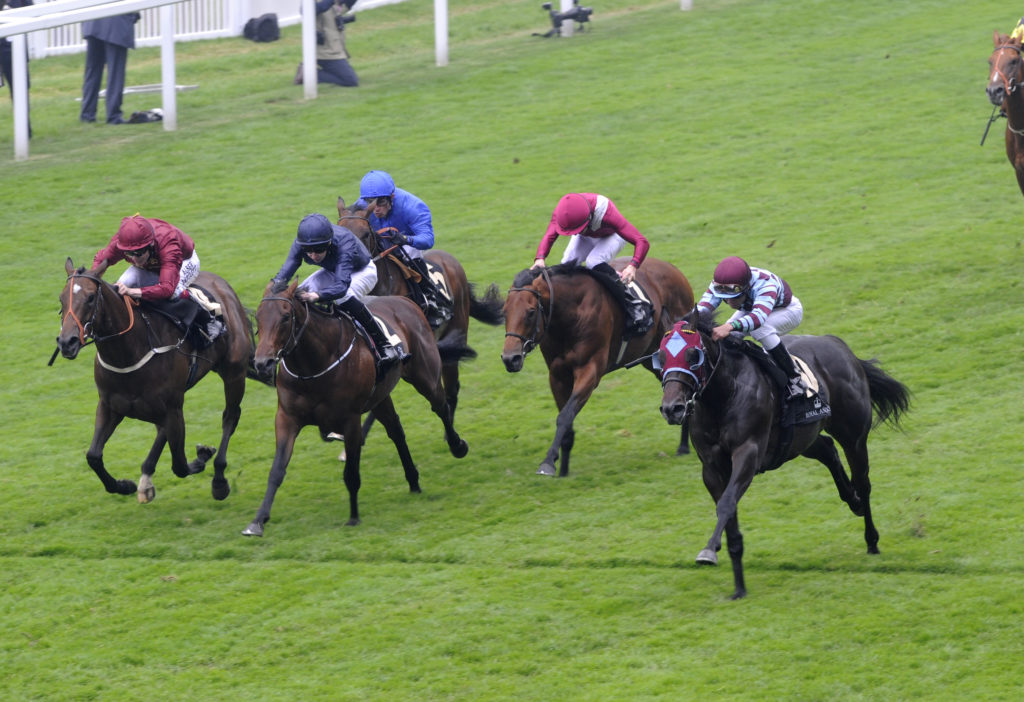 No Nay Never (right) is the sire of Coolmore’s Arizona – Photo: George Selwyn

Next in the ratings are Arizona, on 110, and Threat, on 109. These two were separated by just half a length in the Coventry Stakes and if they progress they both have prospects of a stallion career, as Arizona is owned by the Coolmore partners and Threat carries the colours of Cheveley Park Stud.

Although both of Arizona’s parents carry the USA suffix after their name, his sire No Nay Never qualifies as an honarary European turf horse in view of his successes in the Norfolk Stakes and the Prix Morny, even though his sire Scat Daddy was a dirt horse. Arizona’s dam Lady Ederle was bred in the US, where she was placed. Bought for $27,000 as an in-foal three-year-old in 2012, Lady Ederle seemed at first glance an unlikely sort to attract the attention of a European buyer.

However, she does in fact have the pedigree of a smart middle-distance turf horse. Her sire English Channel was a triple Grade 1 winner at up to 11 furlongs on turf as a four-year-old and her dam Bright Generation was an Oaks d’Italia winner by Rainbow Quest. Bright Generation is also the second dam of Dabirsim, who won the Prix Morny and Prix Jean-Luc Lagardere to become France’s champion juvenile of 2011. Lady Eberle was carrying to Dabirsim’s sire Hat Trick when she was sold in 2012.

Threat, the Coventry Stakes and Richmond Stakes runner-up, is another whose dam combines a high-class American-raced sire with a first-rate European family. The mare, Flare Of Firelight, was bred in Kentucky by the Niarchos family’s Flaxman Holdings and comes from such a good female line that it now seems astonishing that she made only 9,000gns as a three-year-old, even allowing for the fact that she never finished better than fourth in eight starts in Ireland and France. Buyers were no doubt unsure about her sire Birdstone, even though this grandson of Unbridled had won the Belmont Stakes and sired the Kentucky Derby winner Mine That Bird and the Belmont Stakes winner Summer Bird in his first crop.

Whereas Birdstone had raced only on dirt, Threat’s second dam, Shiva, had been a champion older filly in Europe. She won the Tattersalls Gold Cup and put up several other first-rate efforts against the males, including seconds in the Eclipse and the Champion Stakes. Shiva was also a half-sister to the Oaks winner Light Shift (now the dam of Ulysses) and to Light Shift’s sister Strawberry Fledge (now the dam of Prix Ganay winner Cloth Of Stars).

Flare Of Firelight’s first four mates for the La Lumiere Partnership were Garswood, Footstepsinthesand, Slade Power and Galileo Gold, but the promise shown by her Footstepsinthesand colt Threat will surely see her going up market before long. Threat is inbred 4 x 4 to Storm Bird, the dominant two-year-old of 1980.

The list of leading two-year-olds also features two colts from the first crop by American Pharoah, who ended the long wait for another Triple Crown winner in 2015. Monarch Of Egypt, runner-up to Siskin in the Railway Stakes and Phoenix Stakes, is rated 114, while the American-trained Maven, winner of the Prix du Bois, is rated 106. Although American Pharoah was never asked to tackle turf during his 11-race career and has little in his pedigree to suggest that his progeny will thrive in Europe, his early results demand a rethink. He was given a helping hand in producing Monarch Of Egypt, as the colt is out of Galileo’s daughter Up, who won at up to Group 2 level on turf.

Maven, despite appearing to have a dirt pedigree, is also out of a mare – Richies Party Girl – who showed very useful form on turf, including when travelling from the US to France to finish fourth in the Prix du Calvados. 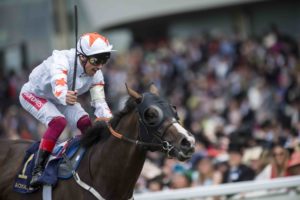 Up Next
Hunting for the next Advertise at Doncaster