Many challenges still to face in our centenary year
Exclusive Columns

A witness to change

It’s a comment I’ve got used to hearing in recent years: “I suppose you’ve seen quite a lot of changes in the game since you became involved with racing.” And it’s one I can hardly deny in my 54th year as a professional writer on the subject.

But I can recall making the same remark to my elders and betters back in the day, and last month I attended the funeral of one whom I surely quizzed in similar terms. He had been witness to a whole lot more changes in the thoroughbred business than me, and, amazingly, he retained vivid memories of everything right to the end.

Born a generation before me, John Bell was 96 when he died towards the end of November after a full life punctuated by a three-year spell as a prisoner of war, first in Italy and later in Germany. On his repatriation in 1945 he completed his qualification to become a chartered surveyor, but he had been introduced to the thoroughbred before the war, and horses soon became his dominant passion.

He attended his first December Sales in Newmarket in 1947 and he was present at every renewal of that auction up to 2014. I dare say it was on one such occasion that I first met him, maybe as long ago as at my initiation to the event in 1965. 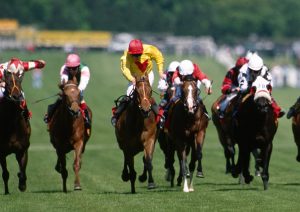 He began as a small-time breeder and was never anything but a small-time breeder. There was a time when he had horses in training in England, France and Belgium, but that was a costly exercise which brought little success and he could not sustain it for long.

Ask me to name a number of horses with which he was associated, and I would find it a struggle. But I do know that his favourite mare was Blackpool Belle, and there was a good reason for that.

Blackpool Belle was a diminutive daughter of The Brianstan who had won sellers at Hamilton and Wolverhampton as a two-year-old and an apprentice handicap at Ripon at three when in training with Jack Berry. To a mating with the unfashionable Crofthall, she produced a colt who realized 2,000gns as a yearling at Doncaster, and who eventually, as a six-year-old gelding, earned distinction as winner of the Group 2 Temple Stakes in 1997.

He was Croft Pool, and it seemed fitting that the only Pattern winner John Bell ever bred should notch his success at Sandown Park – in what was the village of Esher when he was born there in April 1920.

Few horses successful at such an exalted level have been as obscurely bred as Croft Pool. His sire got nothing else of note, and both halves of his pedigree were remarkable for a profusion of non-achievers, but his breeder would have been well aware that two of the third-generation ancestors – Philemon in the top half and King’s Leap in the lower – had connections in common, each being by a son of Nasrullah out of a daughter of Big Game.

John was thoroughly versed in pedigrees and knew the characteristics transmitted by all the stallions of his time, and I was grateful for the opportunity to pick his brains on numerous occasions over the years. I have often wondered what he might have achieved if he had been able to play in the big league.

The immediate post-war years must have been a fascinating time for a young man to make a start in the bloodstock business, which was just beginning to resume its international character and racing was entering a boom period, exemplified by huge attendances, while a number of innovations represented significant progress in the sport.

Aged two, going on three, my 1947 meant precisely nothing until I came to learn about it as history – the year of the severest winter in living memory, the magical summer when Denis Compton was able to amass over 3,800 runs, and Gordon Richards set a similar enduring record by riding 269 winners. They were events that occurred in my lifetime while making no impression on me, but were first-hand experiences for the preceding generations. The time would come when I would feel a need to play catch-up, and John Bell was one of the many to whom I could turn for some sense of the way things were.

John’s 1947 took in the introduction of the photo-finish camera, first employed at Epsom in April, and the novelty of evening racing, which began with a fixture at Hamilton Park in July. Between those consequential events came Tudor Minstrel’s 2,000 Guineas, a performance whose like nobody expected to witness again – and nobody did until Frankel produced a near carbon copy in 2011.

That was also the year when Sayajirao, the record-priced yearling of 1945, won the St Leger, ridden to victory by Edgar Britt, who, astonishingly, has contrived to out-live John, having celebrated his 102nd birthday last October.

The leading sire of 1947 was Nearco, heading the list for the first time after Hyperion had collected five titles in the previous seven years. Who could have guessed that Nearco’s male descendants would come to dominate around the world while the Hyperion line would fall into something approaching terminal decline?

Nearco was syndicated, his fee not advertised, and the only way in was to obtain a shareholder’s nomination, which rarely became available. But 400gns sufficed to use Hyperion, always assuming that one’s mare was deemed good enough to fill one of only 40 slots. Precipitation commanded the same price, as befitted one whose fame on the turf rested on victory in the Gold Cup, and another at 400gns was Ocean Swell, victorious in both the Derby and Gold Cup, but Tudor Minstrel’s sire Owen Tudor could be used for only 300gns.

Stamina was clearly the most prized asset among the stallions of the day, with demand for the proven middle-distance and staying horse coming overwhelmingly from private breeders. Sprinters catered for a completely different clientele and were generally much cheaper, though Panorama, who had been unbeaten as a two-year-old, must have seemed an expensive option for commercial breeders at £300.

I valued John Bell’s friendship for part of my education in racing and breeding matters, but I shall also remember him for an experience we shared that left us both in shock. It was perhaps 20 years ago, when he phoned to say that he was about to head for Newmarket from his stud at Six Mile Bottom and wondered whether he could pop in for a chat. He would do that from time to time, and was always a welcome visitor.

In the course of our conversation his attention was drawn to a set of books which he had never noticed before, and he asked me what they were. I told him that they were volumes, bound half-yearly, of an old weekly publication, the Licensed Victuallers’ Gazette. Perhaps not surprisingly, he asked what on earth I wanted with them.

I explained that the paper was aimed at the pub trade, and because in the late 19th century devotees of the turf commonly congregated in pubs, it always devoted a lot of space to racing matters. I’d bought the books, which covered the period from 1878 to 1894, as I’d long had a fascination for racing history, and I’d learnt a lot from them.

John asked if he could take a look at a copy, and I told him to go ahead. There were 26 volumes to choose from and he took one off the shelf at random, then opened it at random. His eye immediately hit on an item which seemed to disconcert him, his voice fainter as he mumbled something about an ad for the sale of a London pub. He was checking on the date of the publication while I told him that the paper always carried loads of ads for pubs.

He was visibly more uncomfortable now, and I suggested that he might like to sit down. He took a minute to compose himself before he could find the words to explain, and the halting delivery was understandable once they had come out. That pub was his grandfather’s, and the date of the ad would have been about the time he bought it.

A shiver ran down my spine, and the room fell silent for several minutes before John stood up to take his leave.

Up Next
Many challenges still to face in our centenary year