A way with the ladies

Often, when watching two horses battle out a thrilling finish, I am reminded of Abba’s declaration that the winner takes it all. A margin of a few inches can turn the victor into a valuable stallion prospect, while the runner-up often finds himself unjustifiably overlooked. Breeders tend to concur with that harsh American saying that the second-place finisher is the first loser. 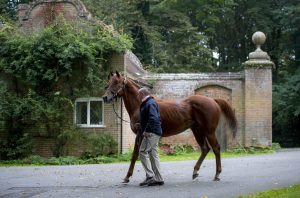 In which case we should be eternally grateful that two tight finishes went Pivotal’s way in the summer of 1996. The Racing Post records that he “led last stride” in the King’s Stand Stakes, in which he and runner-up Mind Games raced on opposite sides of the course. Then, having disappointed as favourite for the July Cup, Pivotal again led in the last stride to defeat those fast mares Eveningperformance and Hever Golf Rose in the Nunthorpe Stakes. Sir Mark Prescott didn’t ask him to race again and Pivotal was retired after just six starts to his owner-breeders’ Cheveley Park Stud, to stand alongside his sire Polar Falcon.

At a time when Machiavellian and Rainbow Quest were priced at £40,000, Pivotal began his career in 1997 at £6,000, some £4,000 cheaper than his sire Polar Falcon. Yet he is still going strong some 21 years later. Having covered 60 mares at the age of 24 earlier in 2017, Pivotal ranked 15th on the leading sires’ list at the start of November, continuing in the sort of form that had seen him build an impressive career total of 26 individual Group 1 winners (including two in South Africa). The latest of those victories came when Brando took the 2017 Prix Maurice de Gheest. Another of his Group 1 winners, the up-and-coming Siyouni, ranks fourth behind Nathaniel, Galileo and Sea The Stars on France’s leading sires’ table.

Outdoing Galileo
More importantly, perhaps, Pivotal also occupied first place on the broodmare sires’ table, having leapfrogged Sadler’s Wells and Galileo with a stunning double for his broodmare daughters on British Champions Day. Ironically, it was Galileo – another stallion looking for his first broodmare sires’ championship – who was directly responsible for one of these Group 1 winners. He sired the Fillies & Mares winner Hydrangea from Pivotal’s fast daughter Beauty Is Truth. Then it was the turn of Galileo’s best son, Frankel, who sired the dynamic Champion Stakes winner Cracksman from Pivotal’s Listed-winning daughter Rhadegunda.

This flourishing Galileo-Pivotal cross had also been very ably represented by the 1,000 Guineas and Oaks runner-up Rhododendron, who added to her Group 1 successes in the Prix de l’Opera.

Altogether Pivotal’s daughters had built a worldwide total of 23 stakes winners by 19 different stallions by the start of November, with roughly half of them doing their winning outside Britain and Ireland

Rhododendron is out of Pivotal’s Irish 1,000 Guineas and Nassau Stakes winner Halfway To Heaven, who was also very ably represented in 2017 by Magical, another Galileo filly who went close to Group 1 glory when short-headed by stablemate Happily in the Moyglare.

Altogether Pivotal’s daughters had built a worldwide total of 23 stakes winners by 19 different stallions by the start of November, with roughly half of them doing their winning outside Britain and Ireland. Polarisation won the Group 1 Sydney Cup in Australia; Mikki Rocket and Fan Dii Na won Graded races in Japan; and Pivotal’s broodmare daughters enjoyed enough success in France to place him sixth on that country’s Pères de mères list. The first major dividend in France came when the Tamayuz filly Precieuse won the Poule d’Essai des Pouliches and further Group successes came from Rhododendron, Cracksman, the Dubawi filly Intimation, and Fighting Irish, who became the first Group winner for Camelot when he took the Group 2 Criterium de Maisons-Laffitte.

Pivotal’s emergence as a world-class sire and broodmare sire is all the more remarkable in view of the obstacles he had to overcome early in his career.

Although he attracted 68 mares in his first season (compared to the 130 covered by Spectrum, another first-crop sire), Pivotal covered only 49 mares in his second season and consequently his fee was reduced to £5,000 for his third, fourth and fifth seasons. The fact that his fee remained low in his fifth season reflected his eighth-place finish on the British and Irish table of first-crop sires. None of his 20 domestic runners had won a stakes race, but these basic facts told nothing like the whole story. Those 20 runners in Britain and Ireland included the Middle Park Stakes third Red Carpet and a couple of colts – Bourgainville and Kyllachy – that achieved Timeform ratings in the 90s. In addition, Pivotal had another seven first-crop two-year-old winners in Europe, headed by the Italian stakes winners Low Pivot and Morena Park.

Low Pivot was Pivotal’s first Group winner but he proved to be just the tip of the iceberg. The Group 1-winning fillies Silvester Lady and Golden Apples emerged in 2001 and then Kyllachy developed into Europe’s champion older sprinter in 2002, when Golden Apples was a dual Grade 1 winner in the US. There were even two sons, Needwood Blade and Ratio, who became Group winners as five-year-olds, taking the first crop’s statistics to six Group winners and three Listed winners from a total of only 58 foals. Factor in Pivotal’s £6,000 fee and it becomes vividly clear that he was well out of the ordinary.

As everyone now knows, the high-class winners by Pivotal have never stopped flowing and for a few years he ranked as the highest-priced stallion in Britain, with his fee peaking at £85,000 in 2007 and 2008.

Why so fast?
This reminds me that when I reviewed Pivotal’s pedigree for The Sporting Life following his Nunthorpe success I asked: “How is it that this season’s top British five-furlong performer has two parents who never even tackled a distance as short as five furlongs?”

I went on to explain that not only did Pivotal’s parents never tackle the minimum trip but also ran respectably over distances beyond a mile.

I wrote: “His sire Polar Falcon tried 9.2 furlongs on his third appearance, finishing a five-length fourth to Priolo in the Group 1 Prix Jean Prat. Indeed, it wasn’t until after Polar Falcon had raced 12 times, and won four races over a mile (including the Lockinge Stakes), that he finally showed himself to be equally at home over six furlongs. This he did by producing a startling late run to collar Sheikh Albadou in the Ladbroke Sprint Cup.

“Pivotal’s dam, Fearless Revival, was third of ten in the Ballymacoll Stud Stakes, a Listed race over a mile and a quarter. At two she had moved up to seven furlongs after a facile win over six at Epsom, and promptly won the Kensington Palace Stakes at Ascot before taking second place in the Rockfel Stakes.”

A more appropriate question was where had Pivotal found the speed to win both the King’s Stand Stakes and the Nunthorpe? My view was that he owed his speed partly to his grandsire Nureyev. Although capable of siring mile-and-a-half horses of the calibre of Theatrical and Reams Of Verse, Nureyev also sired such fast horses as Soviet Star, Wolfhound, Dancing Dissident, Great Commotion, Diffident, Robin Des Pins and Vilikaia.

Another notable aspect of Pivotal’s success is the proportion of fillies among his best winners. They account for half of his 26 top-flight winners, for four of his 13 Group 2 scorers and for no fewer than 26 of his 35 winners at Group 3 level

It is also worth mentioning that Pivotal’s fourth dam, Yucatan, collected a Timeform rating of 118 after winning four times over five furlongs at two, and Yucatan passed her speed to his third dam Zerbinetta, a dual winner over the minimum trip at two.

To get back to Pivotal, another notable aspect of his success is the proportion of fillies among his best winners. They account for half of his 26 top-flight winners, for four of his 13 Group 2 scorers and for no fewer than 26 of his 35 winners at Group 3 level. That adds up to 43 fillies among his 74 Group winners.

Here we have part of the explanation of Pivotal’s prowess as a sire of broodmares. His above-average daughters on the track are often developing into successful producers, as the likes of Halfway To Heaven, Beauty Is Truth, Chorist, Infallible, Golden Apples and Briseida have shown.

The Derby second Main Sequence is out of the Group-placed Ikat, and the 2017 Poule d’Essai des Pouliches winner Precieuse also has a Group-placed dam. Cracksman has a Listed-winning dam in Rhadegunda, but there are some notable exceptions to this general rule. The dam of July Cup winner Mayson never raced and the dam of St Leger winner Harbour Law was just a fair handicapper.

We can expect to see Pivotal’s broodmare daughters continue to make a great impact. As I have explained before, success as a broodmare sire tends to grow exponentially, as more and more daughters become producers. They had 234 new horses of racing age in 2015, 235 in 2016 and 281 this year.

Cheveley Park’s faith in Pivotal is underlined by the fact that 30 of the 127 mares listed on this year’s stud card are by Pivotal, as are quite a few of the fillies in training, so the debt to this great servant is likely to mount still further.

Up Next
Numbers up but breeders unfazed