Too much focus on betting
Exclusive Columns

A sound initiative at heart of TBA review

Even before the publicity surrounding the pre-Derby testing of Galileo Gold, the TBA had launched a genetic testing review on behalf of its members.

Members have had several opportunities to hear Dr Webbon’s views on the matter recently through his briefings at the TBA seminar and later at the AGM, and he outlines his remit thus: “There are two aims of the review. In the first instance it is to make as much information available to breeders as to what tests are currently available, their costs and their value – that’s stage one. 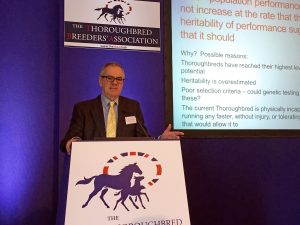 Dr Webbon emphasises the fact that ultimately the decision to test or not to test, lies with the individual breeder and/or owner.

He says, “It’s not our job to say whether tests are good or bad but to advise on what they can achieve and what they are based on.”

Plusvital, the Irish-based company which now owns Dr Emmeline Hill’s Equinome operation which was responsible for carrying out the Speed Gene test on Galileo Gold, launched four new tests in July. These include the Elite Performance Test v3.0, which it purports can identify the potential for elite racecourse performance and breeding success, and a Dirt v Turf v1.0 test to indicate a horse’s preferred racing surface.

Also launched is a more specific version of the Speed Gene Test called Distance Plus v1.0, which it is claimed can refine optimum racing distance beyond just the C:C, C:T and T:T classifications for sprinters, middle-distance horses and stayers, and Raced/Unraced v1.0 to establish a foal’s ability to race as a two- or three-year-old.

Plusvital’s Chief Executive Mike Shelly claims genetic testing has gone “mainstream” in the last year and said, “Our clients are already using genetic test information to inform their breeding and racing decisions and the additional information in the new tests will further strengthen the use of this technology across the industry where it is being used as a tool to complement existing horsemanship and pedigree analysis.”

It is this complementary aspect which most appeals to Dr Webbon, who said at the TBA seminar, “Genetic testing isn’t the answer to everything. It contributes usefully to making breeding and racing management decisions – but only in conjunction with conventional methods.

“If we are seduced into trying to improve the athletic performance of the racing thoroughbred using modern genetic and genomic techniques it will probably fail and will almost certainly lead to an increased number of horses that aren’t sound enough to train and race. We really shouldn’t be going down that route but what we can do is use genetic techniques to reduce the level of injury and disease. If we can achieve that it will have significant benefits for all of you who breed, own and train racehorses, and clearly will have benefits for the horses.”

It’s hard to argue with a stance that puts the emphasis on breeding with a long-term view that has horse welfare at its core and should ultimately improve and enhance individual families, as well as the breed as a whole. Furthermore, this approach could also aid the BHA’s desire to increase the equine numbers – not simply by breeding more horses.

“Sound horses can run more frequently, so the BHA’s objective of increasing field sizes can be met by increasing the number of starts. The current average is 5.7 starts per season for Flat horses and the staggeringly low 3.4 for National Hunt horses,” argues Dr Webbon.

One sticking point for breeders could be the cost involved in genetic testing, which is currently around £500 per horse, a figure which compares unfavourably with single-gene testing in other species, which tends to be around £30 for sheep, £50 for Fell ponies and £65 for dogs.

“There is a fiction that says genetic tests need to be expensive,” says Dr Webbon. “There’s absolutely no reason for that whatsoever. Testing is cheap and getting cheaper all the time, it’s not an expensive activity.”

There’s no doubt that whatever means breeders decide to employ in selecting breeding stock and producing racehorses, considering heritable traits, such as fracture risk and laryngeal paralysis, is every bit as important as breeding for performance, though inevitably of course the two go hand in hand.

We’ll let Dr Webbon, whose review will be submitted to the TBA in the coming months, have the final word: “We should abandon the notion of trying to produce faster horses specifically by testing for athletic potential but try to produce sounder horses, that can run more frequently and run better, and then may be coincidentally capable of running faster because they are inherently fitter and sounder.”

Up Next
Too much focus on betting